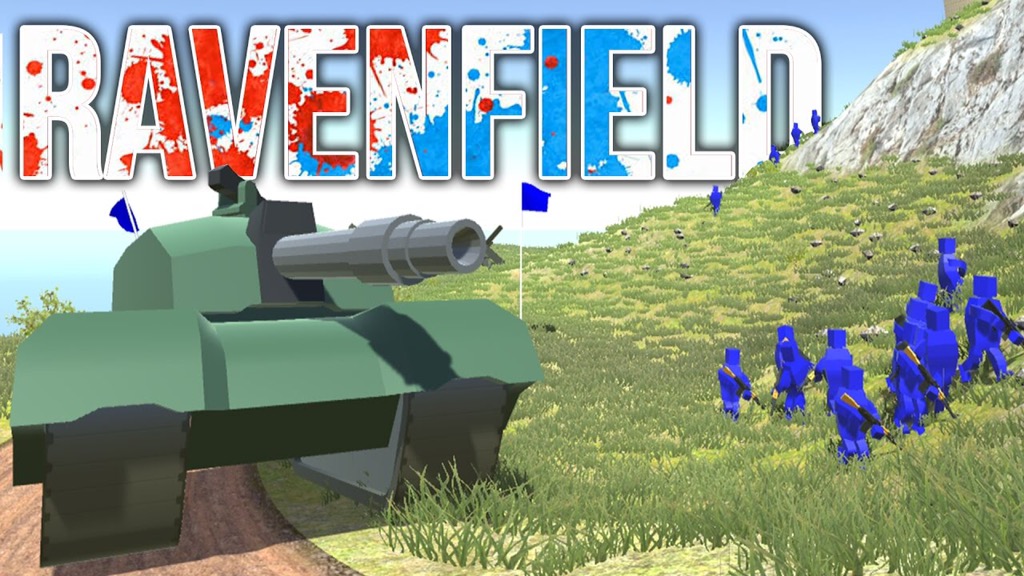 PLAYER! The enemy team RAVEN is advancing on ISLAND! Prepare your weapons! EAGLE team, mobilize!
Alright. Ravenfield . . . Where to start? Going to be totally honest here, I don’t play many FPSs. Let’s start with an overview?

Basically, there’s a bunch of flags that you can take. Oh, and there are bots that run around.

The game handles smoothly. It doesn’t take that long to get used to, even for a relative noob like myself. It uses the WASD/mouse combo very common in FPS games, with the addition of crouchs, lying prone for reduced recoil and movement speed.

There are a variety of weapon types to get used to and enjoy. The RK-44 makes for a highly balanced assault rifle that can be used in virtually any situation. The M1-Garett is a marksman rifle for short to medium range. The SL-Defender, on the other hand, is a pure sniper rifle. If you really wanna shake things up, there’s even a stealth weapon: the Quicksilver. Bots won’t attack you unless you’ve shot them, or you’re in their line of sight. Keep in mind I’m only counting non-hidden-non-op weapons. Though there are some fluff weapons. Try as I might, I can’t figure out a purpose for the Greaser.
That’s only the primary weapons. There’s a large variety of sidearms, grenades, and even rocket launchers. The game does a good job of balancing each of the weapons, keeping any one weapon from totally trumping another.
This actually leads into why the game mode ‘Skirmish’, is so excellent. There are several game modes. Point match, wherein each kill a soldier makes contributes points multiplied by the number of flags the team said soldier is on. In this mode, once you die, you’re respawned after a short period of time. It’s enjoyable, but gets old quickly, unless you make sure to switch up the maps during play sessions.

Battalions, on the other hand, simply gives your team a grouped, set number of lives. First team to run out loses. It doesn’t feel very different from point match. Really nothing special.

Spec Ops is a rather interesting alternative. Rather than an all-out war between two massive factions, you merely play as the leader of a small squad sent out to eliminate another small squad. Personally, I find it a bit boring. It sounds fun in theory, but especially in the larger maps, playtime can drag. All sense of tension disappears after the first five minutes running around. Once you do find the enemy, if you get shot first, it’s over. It feels like such a massive waste of time. Personally, I find it much more rewarding to lead a squad into a fortified location as bullets are traded around you.
To be fair, on the smaller maps, it doesn’t drag quite as hard. And it feels really cool carefully knocking out key areas using blitzkrieg tactics and gratuitous smoke grenades. Or at least, that’s how I do it. That’s the cool bit. It forces you to think tactically. So, yeah. It’s pretty hit or miss depending on the map.

Haunted is a really odd one. You take a group with you to go to ghost hotspots where you promptly shoot up a bunch of ghosts for some reason. It’s weird, but worth playing once or twice.

Skirmish is generally my favorite mode. The goal is to either eliminate all other enemies, or to take enough flags to ‘dominate’ the opponent. The two major twists are the reinforcements and respawning. You see, there isn’t any respawning. You periodically receive reinforcements from a plane. The reinforcements will parachute over a relatively random location. If you die while the plane is flying overhead, you’ll become one of the guys falling out with the exact load-out you requested.

Most of the time, you won’t die like that, so what happens? You get sent into the body of a bot.

This is so cool. I love how I’ll be occasionally thrust into playing a sniper in the middle of a short range firefight. Quickly identifying cover, I shift into prone position. I flip through my weapons. Nothing feels cooler then discovering an automatic sub machine gun as my sidearm then whipping it out to mow down the opposing force. It is awesome. It’s not all great, though. Every now and then I’ll be respawned at the back of the map, opposite the action, with no vehicles. This sucks on particularly large maps.

Vehicles are varied as well. With little fluff, compared to the weapons. Each vehicle serves a clear and distinct purpose. The jeep is fast and effective firepower meant for hit and runs. The tank clears the way for the infantry, acting as (surprise) a tank! Each of the vehicles are fun to play, with the exception of the helicopter, which we don’t talk about.
The maps range in quality. Mountain range is big and massive, but my lord does it take ages to get where you want to. Sixty percent of round in this is just running. Island is by far my favourite. It’s fast and you can get to the action in under a minute, no matter what.

Citadel is surprisingly good as well, despite being a work in progress. Usually you’re already on a vehicle and capturing one of the outpost flags. There always seems to be enough vehicles to get to where you need. The highlight of those matches tends to be at the gate. Smoke grenades are everywhere, blocking off sight for both factions within the narrow choke point. Awesome.

The bots are the coolest part of the game, by far. While it isn’t on the level of something like Dwarf Fortress, it really doesn’t need to be. For whatever reason, the small details more then make up for it. There’s always one guy covering your six while you advance. The transport helicopter drops down after paradropping other guys, in order to grab other guys.
Performance is solid. Running it on my dinosaur Mac, it handled darn smoothly on the smaller maps. Of course, I had to lower everything. But you get the point. A mid-tier discrete graphics card and an Intel i3 will guarantee fifty+ fps.
Overall, a good time. Based on the update frequency, the game will only get better. A recommended buy.

View all posts by terriblety